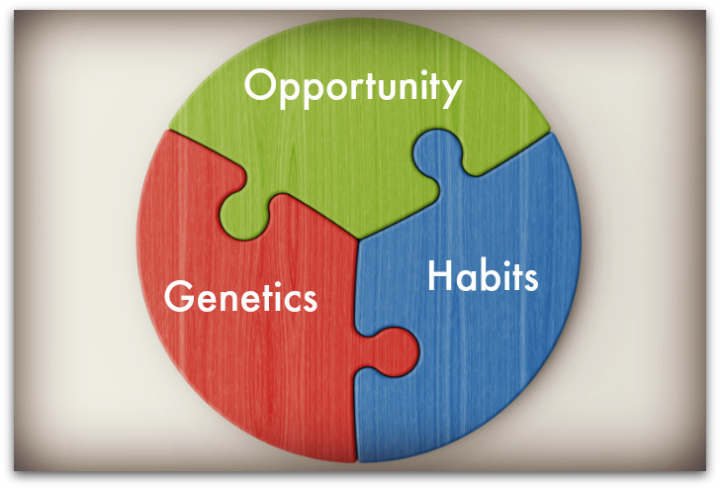 I’ve been thinking a lot about this question and I’m making some discoveries.

Of course I’m not a “specialist” on addiction, but I’ve been reflecting on my downward spiral and can make some good conclusions. None of these factors can excuse my own choices, but they give me a little perspective and path toward recovery. If any of the three were missing I don’t think I’d be in such a bad way.

1. GENETICS: I’ve inherited some alcoholic dispositions from my family. Let’s call this genetic vulnerability. As far back as my parents can remember, drinking has been a problem in their families. Aunts, uncles, grandparents, and cousins all have suffered from these same problems. I just was better at hiding mine.

Alcoholism is caused by biochemical/neurophysiological abnormalities that are passed down from one generation to the next or, in some cases, acquired through heavy or prolonged drinking. ~ Beyond the Influence

2. HABITS: I developed a very negative habit loop when I drank. Let’s call this addictive behavior. Often this was to relieve stress, fight boredom, or just because I liked the feeling. Eventually, my patterns became default behavior.

3. OPPORTUNITY: I had way too much opportunity. Let’s call this availability. My regular drinking started about the same time I had enough money to maintain the abuse with little effect on checkbook. Then my office job allowed for long lunch breaks or even “going out on calls” all afternoon. Things were even worse when I started working from home. This is the reason why alchol abuse explodes when people retire!

I’ve been making some notes about my addiction progress and I’m confident I started loosing control when these three aligned. The job now is to untangle the mess, find the good parts in my genetics, replace those habits, and limit opportunities.

The more I understand the better my chance to beat this thing.

Looking back at this post, I’m missing one obvious fact.

It was alcohol that caused my addiction, simply that.

I still believe the statements above were accelerating factors (or excuses I told myself) but the main enemy is the addictive poison I was drinking. This new insight has been a big part of my latest attempt at recovery. Thanks to a little comic book about beating addiction.

The problem with drinking only existed because I believed the lie that alcohol would make me happy – that was the doorway for this chemical to enter my brain and take control.

There is only one enemy, everything else is details.