I never imagined this is how I’d get sober again.

But it was exactly what I needed.

I’ve spent the last week in the mountains of Southern Haiti observing a small Vodou dance festival. At its most basic level, it was a reunion for my girlfriend’s family. I was an honored guest, but also something of a curiosity. Very few American’s are included in such occasions.

Even after all the time I’ve spent in Haiti, it was a culture shock. I’ve wanted to see this aspect of traditional Haitian culture up close for many years. I took on the role of a smiling boyfriend and imagined myself an amateur anthropologist. It was a learning experience, even if I don’t convert to this religion anytime soon.  I have great respect for its role in Haiti’s history and the cultural imagination of her people.

More important – this was my first full week back to sobriety.

In early June, I dove headfirst back into my addiction and the last 3 months have been shit. Coming back to Haiti was my attempt to reset. It was here that I started my recovery last February. This post is a little about my latest detox experience, the post about the relapse is coming later. 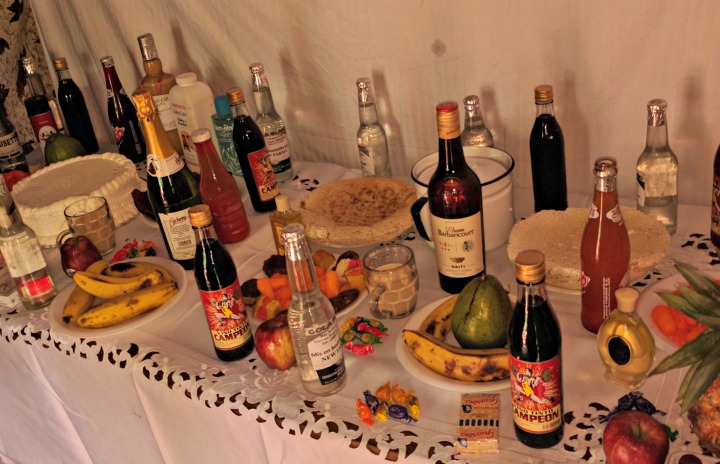 The Festival was Fueled by Alcohol

Driving up to the mountains, I didn’t fully appreciate the level of drinking involved in the event. Everything from the rituals to the dancing was centered on hard liquor.

Not an obvious way to avoid drinking.

It was mostly small batch sugarcane moonshine called “kleren.” They also passed around several bottles of more costly rum, especially to offer to the Spirits. In one ceremony, they used wine and Champaign as well.

As expected, those who drank the most were the most animated dancers – often rolling around in the dirt “filled with the spirits.” It was easily the wildest intoxication I’ve ever witnessed. These revels would last for six full days and consume over 10 gallons of moonshine.

This was alcohol abuse on display in all its raw horror. Watching this drama was the best antidote I’ve ever had to alcohol craving. The putrid smell of the moonshine was also repulsive. The reckless behavior was unsettling.

Everything I saw reminded me that alcohol is gross.

After a few hours each day, my interest in the festival quickly waned. I would retreat to our small shack and relax. I enjoyed abundant social time with the Creole speaking mountain neighbors. The funny American became something of a stage B for anyone who preferred comedy to the dancing. When that exhausted me, I’d enter the house to rest and read.

I caught up on some recovery reading that I had forgotten when my relapse began. Most notably was “This Naked Mind,” a book that helps you rethink why alcohol seemed so desirable in the first place. This was the perfect commentary on what I observed at the festival. Drinking is truly a shallow way to have a good time and always brings more problems in the aftermath.

We had heavy tropical rain most days, that meant laying in our primitive house with nothing to do but reflect on life. Those were valuable hours that simply wouldn’t have happened in America – or if my mobile data had been working. Being in Haiti gives me a sense of solitude, I’m very peculiar here and always something of an outsider. I’m fluent in their language, but having no English conversation forces me to talk less. That puts me in a reflective mood.

My Girlfriend Made the Difference

There were moments of craving, despite the terrible drink choices. That’s when my girlfriend stepped up to her role as the sobriety enforcer. This is something we discussed before I came back. She promised to offer me all the accountability possible short of violence, which I imagine she would embrace if the moment came.

You simply can’t argue with a tiny Haitian woman convinced she’s in the right.

She was my best support in February when I first went sober, giving me a reason to pull myself together. Our relationship is important to me and drinking was putting it on the rocks. She became my biggest cheerleader, tracking the days sober with me each morning. It helps that she does the shopping and handled the money (I’m still confused by the currency here).

Getting alcohol without her consent is a slim possibility.

What about Withdraw and Medical Complications?

The Internet is full of warnings about the medical risks of detoxing from alcohol. There are very dangerous side effects. These strike the most severe cases, those drinking upwards of 24 units per day with zero days sober in many months.

I don’t fit that category. Even in my 3-month relapse there were several “day one” attempts. I rarely drank morning and evening. My heavy days were around 18 units, but a typical day was around 8 light beers.

My 118 days of recovery this year taught me how my body responds to the first 7 days of alcohol detox. In February, my withdraw symptoms were very mild and less severe than a typical hangover. This time was almost nothing, just some headaches. Even the mental stress of breaking the patterns didn’t affect me. My mind was occupied with processing the new experience at the festival and learn everything possible in that short period of time.

In other news, I’m taking Wellbutrin

This was a factor moderating my drinking before this week of detox. I began Wellbutrin to address depression in the middle of August. This was after a failed go at Depakote in April. Like most medicines, it warns against alcohol use. That gave me a good reason to take things easy. I also noticed a real decrease in both the craving and enjoyment of drinking. This is something I’ve seen elsewhere on the Internet, but I am not ready to make a full conclusion yet.

Whatever the reason, I’ve been tapering the drinking for the last several weeks before I finally gathered the courage to quit again.

Thanks to My Recovery Friends

I am still amazed at the number of people who reached out to me on Twitter and Email during my relapse. I didn’t know how to respond but you gave me a whisper of hope that I was going to find my way back.

It feels good to be back.