After the step 5 confession, my sponsor began to turn all of the character defects I admitted on their head. He listed examples of how I’ve done the opposite of each since I’ve been in recovery. It was an amazing time of affirmation. Made me look forward to the rest of the 12 steps.

I began to make a list of these positive character traits (or attitudes). Take a look at my list and leave a comment to add your own thoughts.

ME in RECOVERY — ME in ADDICTION 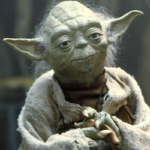 This list has been on my mind all week. I’ve been asking God to replace the former defects with their opposite. Then I’ve been looking for ways to act on these new character assets.

** Side Note, wouldn’t Yoda be an awesome AA sponsor?

Yesterday, I reached out to my friends on Twitter with similar question about positive character traits.

Here are the top responses:

I see lots of the same ideas – confirmation that I’m on the right track. It’s been 66 days of sobriety and I’m amazed at how quickly my life (and character) are changing.