Alcohol addiciton is a …

We’re here to fight addiction, so we better get to know the enemy. Here are a few helpful definitions of Alcoholism. I’m writing a different post to define addiciton more broadly. Leave a comment below to share your personal definition. The official government language is “alcohol use disorder” which you can read about here.

2. The Long Definition of Alcoholism 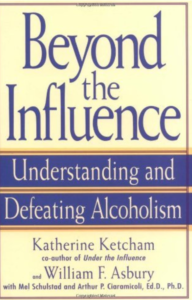 ​Alcoholism is a progressive neurological disease strongly influenced by genetic vulnerability. Inherited or acquired abnormalities in brain chemistry create an altered response to alcohol which in turn causes a wide array of physical, psychological, and behavioral problems.

Although environmental and social factors will influence the progression and expression of the disease, they are not in any sense causes of addictive drinking.

Alcoholism is caused by biochemical/neurophysiological abnormalities that are passed down from one generation to the next or, in some cases, acquired through heavy or prolonged drinking.

~ Beyond the Influence by Katherine Ketcham and William F. Asbury (Amazon link)

3. The AA Definition of Alcoholism

While there is no formal “AA definition” of alcoholism, the majority of our members agree that, for most of us, it could be described as a physical compulsion, coupled with a mental obsession. What we mean is that we had a distinct physical desire to consume alcohol beyond our capacity to control it, in defiance of all rules of common sense. We not only had an abnormal craving for alcohol but we frequently yielded to it at the worst possible times. We did not know when (or how) to stop drinking. Often we did not seem to have sense enough to know when not to begin.

5. According to the Urban Dictionary 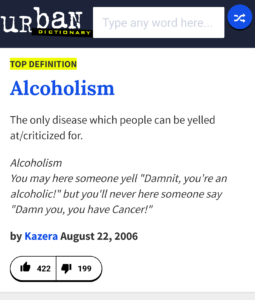 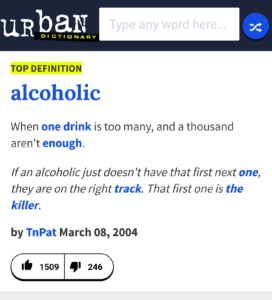