That’s me and my latest fling. I’m fairly certain she’s not going to crash my recovery.

I’m still catching up on the lingo in the recovery community. Here’s the latest phrase that had me confused.

At first I was excited. Maybe they added a 13th step to AA for overachievers – something like extra credit.

Except it turned out to be something different. Here’s what I found for a 13th step definition via the Urban Dictionary: 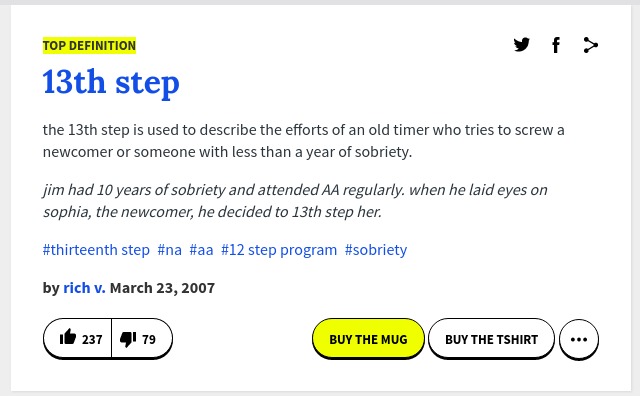 Needless to say, this is considered unhealthy by the AA community and generally harmful to the newcomers sobriety.

Personally, I have enough relationship drama from before recovery. I’m not ready to step into anything new.

Some more reading about 13th stepping:

You can read one woman’s personal story and why she stopped.

The real amends I owe is to AA itself. When I “worked the 13th step,” I was using the program as a seduction tool and the rooms as an alcohol-free singles bar. I was manipulative, self-seeking and dishonest. I made a safe place unsafe, and I set a bad example of sober womanhood.

There’s another good discussion of the 13th step on this rehab forum.

I am in my early 50’s and have been amazed at the number of people who have hit on me since I walked into the rooms. Although I am not one, I have been old enough to be a “Grandma”.  I have had a partner with me most of the time and it hasn’t stopped people from approaching me when I am not sitting or standing near him. If they have done it to me, I wonder how much more they do it to younger women and ones who are by themselves.

Rehaps.com writes how only AA members can stop this behavior

An individual who preys upon new vulnerable members is hindering and actively harming other members. Those who condone or remain passive when aware of thirteenth stepping are also abdicating our responsibilities to help other alcoholics to achieve sobriety.

The Fix blog has an article about this problem too.

Flirting is normal behavior in these groups. It is usually harmless, but it is important to look out for how the other person is reacting – some may take innocent flirtations to meaning something else. . .  If the flirtatious behavior of another individual is making a new member feel uncomfortable it is a good idea to speak to their sponsor about it. This more experienced person should be able to offer advice on how to deal with the situation.

What about you? Have you seen this happen firsthand in your recovery groups? Leave a comment below to share your experience.